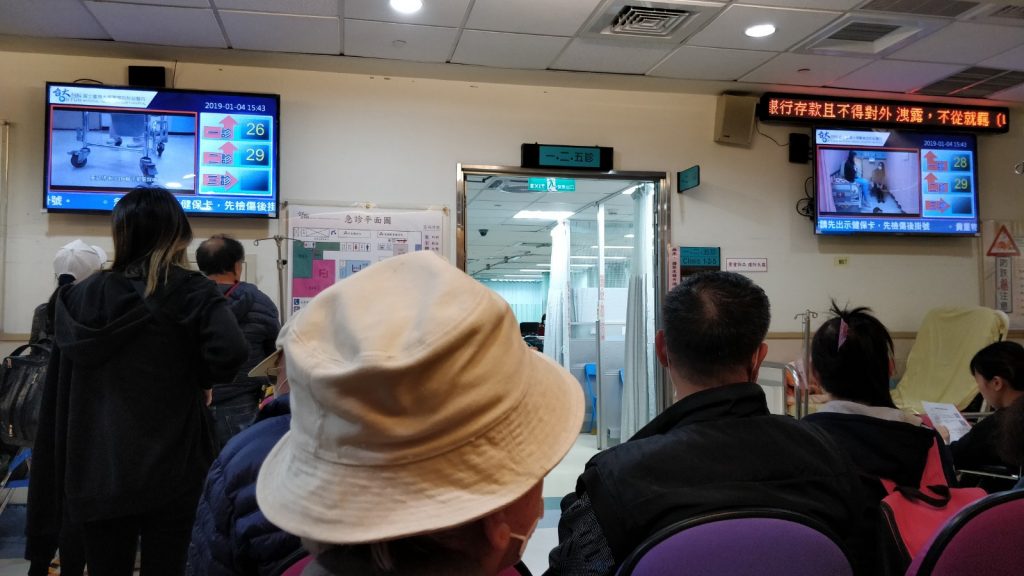 I’ve been in Taipei, Taiwan for close to two weeks now. After the first couple of days I came down with a minor cold. I used to live in Taiwan, and I remember now that in Taipei, the winters tend to be cool and damp and having a mild cold and allergies was a common occurrence for me. I didn’t think too much of the initial cold until a night ago when things progressed to what I feared might be pneumonia.

Things were getting worse. I had a persistent cough, a lot of congestion and my asthma was flaring up to the point I could barely breathe. We made the decision to head to the emergency room. Well, really I thought a doctor’s appointment seemed more appropriate but my girlfriend advised to just head to the ER.

The experience is definitely different than healthcare in the west. There’s no expectation of bills that will arrive from various medical agencies at various times in your future. You settle up any payments there on the spot. It’s a bit funny but you sort of pay for the care as you get it, and so as the exam progressed and more things were recommended we were sent back to pay a couple times. It feels a bit silly but at least it keeps you current.

But so we arrived at the emergency room. Registered my name. And described my symptoms. It was good to have my girlfriend help translate a bit here as my Chinese ability is , virtually non-existent. Within 25 minutes or so I was seeing the doctor.

The doctor spoke English well. I was a bit taken aback that he seemed to be pretty young. Maybe I’m just getting older, but he seemed maybe 19 or so but age can be deceiving. He might have been closer to 30. But I don’t think he would have been terribly out of place in one of my English classes with other high school students. But I digress. After describing my symptoms, he sent me to the lab tech to draw blood.

They insert a thing to draw blood or do injections directly into my hand. The lab tech drew blood into a variety of vials to do a panel of tests. After drawing the blood I was a bit surprised when she then dropped a vile of and pushed the injection. It was solution. Apparently to replenish electrolytes I was told.

Next, I was advised to head to radiology for an x-ray. They did a chest x-ray to see how bad the infection might be. Didn’t take very long. I’ve probably had more chest x-rays than a person should have. It should be noted, that generally speaking, you’ll need a chest x-ray to get a working visa if you want to be an English teacher in Taiwan, unless the laws have changed.

The doctor sent me to do a breathing treatment. I’m not sure what this is called, but they hoo up a certain type of medicine (I’ll update later) to oxygen and have you inhale through a tube. I remember doing this treatment when I was a child with pneumonia once. The treatment seemed to help a bit.

The doctor advised me that within an hour I’d have my results. After some waiting we found the doctor and he sat me down and let me know the diagnosis. I have a bad cold and am having an asthma attack. this was a bit anti-climatic.

The doctor said that my blood looked healthy and all levels were regular. He noticed a bit of white in the x-ray that would indicate that there was a bit of infection in my lungs. He prescribed a low-level antibiotic just as a precaution in case this could be early pneumonia. My experience in Taiwan has always been that like to prescribe as much medicine as they can. The price is always reasonable so I always figured to get the meds and then read about them and not take any that didn’t seem necessary.

So let’s recap on the services I received:

What would this type of treatment cost in the US? Any takers? I feel like this care would have to cost at least over $3,000 in the US.

My total out the door cost without applying any insurance was about $130 US dollars. Not bad.